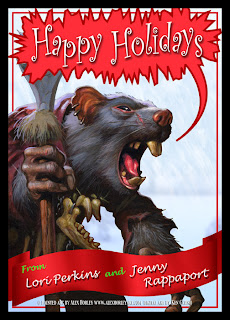 This is my business Xmas card.

The art is from REALM OF THE RODENT, a forthcoming middle grade series that Sourcebooks will be publishing in 2008. I describe the series as LORD OF THE RINGS meets THE SECRET OF NIMH, a wonderful collaborative effort by three comic book writers and artists.

The artist is Alex Horley, whom I met through his significant other, who was attending a Romance Writers of America conference in New York. I had been invited because I was receiving an award, even though at that time I handled very little romance. It was one of those serendipitous meetings (which is why I do these conferences).

About five years ago, I realized I spent a small fortune sending out Xmas cards, that no one really remembered, and I wondered if there was some better way to do this. I knew some of my acquaintances sent donations in lieu of cards, but that didn't really work for me. Then, suddenly I got it. I wondered if I could use that money to support a writer/artist. I sent an email out to all the artists I knew asking if they, or someone they knew, would be interested in doing an Xmas card for me. Alex, who is a very well-known comic book artist, said yes, with the understanding that the card would be sent to hundreds of people in the publishing industry. It was a smart move, because I believe it was part of what helped to sell this book.

See, what goes around, comes around.

Merry Christmas and may 2008 be the best year yet for all of us!
Posted by Ravenous Romance at 1:39 PM 10 comments:

And So This is Christmas

Tomorrow is the last day in the office before my Xmas vacation, and I can really use it this year.

The book deal that ran into trouble a few weeks ago exploded into a mushroom cloud on Monday. The deal is dead. But I am trying to move it somewhere else. That won't happen until the new year, although I will be working on this one through the break.

Of the 9 books I was expecting offers on, only one came through (I closed on it today - HE IS LEGEND: The Richard Matheson Companion - it took 9 months to sell - go figure). Two of them were options on books that earn royalties, but again, I will try to move the authors. Another of the 9 books has turned into two books, and I expect to sell both of them in the new year.

I did have one book idea go to offer without a single piece of paper (I emailed an idea to an author's editor and he came back with the offer).

Another one of these 9 books had a delayed editorial meeting until Jan. 10th.

That is why it's so hard for me to send out new work. I feel like I'm constantly selling the same books over and over again.

I am looking forward to the break, spending time with my family and sleeping in a bit. I'll be reading a little for pleasure (still trying to catch up on business reading) and just re-charging those batteries for the new year.
Posted by Ravenous Romance at 6:43 PM 4 comments:

Being an independent agent is often a fairly lonely experience, so for the past few years I've thrown an agent holiday lunch at my home office.

This year I was really committed to it, so I sent out invites before Thanksgiving, so everyone would mark it down before they got invitations to other parties. I invited 15 agents - three weren't able to make it at the last minute (a former assistant who is teaching grad school now came up with a case of pink eye, which we were very glad he declined to share with us).

So, my offices was closed on Friday, as I cooked and got things ready for our gathering at 1:00. We schmoozed and ate until 5:00. I do appreciate my agent friends, and one of the things I love about us, is even though we all do the same job, none of us do it the same, so we can always learn from each other. We share information and how-to tips, and just a little bit of bitching about the work-load, but we always come away feeling that at least everyone doing what we do is working as hard as we're working.

Saturday I took my son for a new phone and made turkey pot pie with the luncheon left-overs. My best-friend is the New York President of the Drifters, a community non-profit organization, so we went to their holiday fund-raiser at the Cotton Club that night, which was terrific. The house band is awesome, but go now if you're interested, because there's a ferocious battle of eminent domain playing out with Columbia University as I type this (and when you fight authority, authority always wins).

Sunday we got the tree! A full balsam, which is already making the home smell like the holidays. I had dragged the Xmas decorations from the Christmas dungeon on Friday morning (under the delusion that I might be able to clean a house, cook a lunch for 12 and decorate in 4 hours), so we hung those lights and stockings as we watched Rudolph the Red-Nosed Reindeer (can you believe that show is 43 years-old?).

Last year we were late getting the tree, so we bought the last one standing at Stew Leonard's. This year were were early enough to get the tree of our choice, and we're the first one's on our floor with a Christmas wreath on the door. That's kind of nice.

But I only had time to look at two partials this weekend, so I still have a tower in front of me.
Posted by Ravenous Romance at 9:50 AM 7 comments:

I have a fabulous new intern and I have prepared for her six month training period. But, to my utter surprise, a second intern approached me.

Now when I was a baby agent, the woman who trained me told me that agents are born, not made. You either have it, or you don't. But I am an optimist, so I didn't believe her. Now that I've mentored more than a dozen people (4 of whom have stayed on this side of the business) I can tell you she was right.

And I knew right away that Jenny Rappaport was a born agent.

So, when someone approaches me about learning the trade, I always want to give them the opportunity, because you can't make an agent out of a sow's ear. S/he really has to want to be one.

But taking on two interns at once (we have promoted our last intern) meant that I had to get a bit more organized and make sure that there was very distinct work for each to do.

So I cleaned my office this past weekend.

Thankfully, the business has grown considerably less paper-intensive over the past five years, but I still have a completely-book lined office and a storage space full of books downstairs. I thought things were in pretty good order, but after diving into the piles of manuscripts and papers, all I can say is I only did half of it in five hours of intensive labor in which four huge garbage bags of paper were thrown out, six feet of boxed manuscripts (copies of books already sold - and already some published), as well as two towers of book catalogs going as far back as the year 2000 were recycled!

Needless to say, I was not able to do any reading this weekend.

So now I have 5 manuscripts and partials that should have been read already, and I promised myself I would watch the Sci-fi network's TINMAN (which although waaaay too long, did have some charm) because I am selling a brilliant Oz fantasy and wanted to reference it in the query letter. Plus I got screening passes to THE GOLDEN COMPASS (truly excellent - see this one) and I really wanted to see THE MIST (possibly my favorite King novella - question, am I imagining it or was there once a p.c. game based on this (not The Myst) and if so, does anyone have any idea where I might get it?) before it leaves theaters. I try to see and read a lot of the "popular" fantasy and horror stuff that's out there so I can keep up with what's selling, otherwise my references would be dated and I would be irrelevant.

But I'm swamped again. And the holidays are fast approaching, which is always an extra layer of work (joyful, but work none the less).

I share all this with you because I had a prospective client who just couldn't understand how I could have told him that I would get to his partial by Thanksgiving. And then when he asked about it after the holiday, I said it would now be during the Christmas break. He told me this was unacceptable. I told him to go elsewhere, but it never ceases to amaze me how some writers feel entitled to an agent's free feedback on their book by a certain time no mater what time of the year it is.

But it is Hanukkah - a truly wonderful holiday, full of hope and mystery. I love the Hanukkah story. Though not Jewish, I always had a lot of Jewish friends, and this is one holiday I am always thrilled to be invited to share. So, let's eat great food and celebrate this terrific time of the year and be so thankful for each other's friendship and inspiration!
Posted by Ravenous Romance at 7:28 AM 11 comments: